Recently, I have been spending a lot of my time building and growing my LinkedIn platform (you can connect and follow me here ) I had no idea that Linked In was such a powerful tool not only for networking and job hunting, but also for branding. According to Forbes.com over the past decade, LinkedIn has become an essential personal branding tool. It has never been more important to build and maintain a stellar LinkedIn profile. The virtual professional network has morphed from an online resume and networking site to a comprehensive personal branding resource. For this reason, I have recently been spending a lot of my online time on Linked In, but I digress. The purpose of this article isn't to talk about joining Linked In (though you really should if you haven't already), but to talk about an article I came across on Linked In written by financial wealth expert Suze Orman.

In the article, Suze reflects on some of her first jobs and how each of them were integral in her becoming the financial expert she is today. From working as a waitress earning only $400 a month for 7 years to her very first stockbroker job, which she says she was totally unqualified for, Suze's story is a reminder that despite having no formal education, no formal training, and no business background she did not let any of that stop her from pursuing a career as a financial adviser. What she did have however, was a courageous spirit and a willingness to go for it!

Sometimes we talk ourselves out of experiences and opportunities because we don't think we're qualified enough. The truth is, if there is something you want, not knowing how to do it should not be a reason you don't go for it. Throw yourself head first and teach yourself how to swim. What you don't now you can always teach yourself as you go.

Below I am sharing an excerpt of Suze's Linked In article What I Lacked in Qualifications I Learned to Make Up with Courage because there are so many gems she shared and it's best to read them in her own words.

When I was growing up, I had big dreams. I wanted to be the President of the United States, a firefighter, or better yet, a doctor. Not sure where those dreams came from, but they went as fast as they came.

When I was young, I had a speech impediment so I could not pronounce my R’s, S’s, or T's. Words such as beautiful came out as boobital. Because I could not speak very well, I did not learn how to read until much later. So I had to figure out other ways to pick up information. (In fact to this day, I have to confess that I have written more No. 1 New York Times best-sellers than books I have read cover to cover.)

I worked at my father’s deli from the age of 11 through college. I pumped gas at Jiffy gas stations. I cleaned people’s houses at night. I washed dishes at the dorm. I worked seven days a week at two delis through college.

After four years at the University of Illinois and while my friends were all busy going on to become lawyers, doctors, or journalists, I ventured out with my girlfriend to see the U.S. in a used Ford Econoline van that my brother lent me the money to buy.

We lived in that van on the streets of Berkeley, California, for a full three months till I landed my then-dream job, a waitress at the Buttercup Bakery on College Avenue. I stayed a waitress, making $400 a month for seven years till I was 29 years old in 1980.

It was at the end of those seven years that I unexpectedly experienced my first true transformation. I had this idea that I wanted to open up my own restaurant. So I called my mom and dad and asked them for $20,000, to which of course they said no. I remember going to work that next day so sad. How could I have asked my parents for money that I knew they did not have?

That morning, Fred Hasbrook (a customer I had been waiting on for all seven years) came in. “What’s wrong, sunshine?” he asked. “You don’t look happy.”

I told him how I wanted to open up my own restaurant but that obviously was a dream that would never become a reality. Fred listened very intently and then went and sat with all the other regulars who came in for their ritual cup of coffee and breakfast. Before Fred left that morning, he came up to the counter I was standing behind and put down all these pieces of paper. When I started to look at them, I saw they were checks and commitments from the customers totaling $50,000.

Then he handed me a handwritten note on a napkin that said the following: “This is for people like you to make your dreams come true to be paid back in 10 years with no interest if you can.“

I walked into Merrill Lynch and was assigned to the broker of the day, who was a cute 30-year-old by the name of Randy. I told him what the money was for and that I needed to keep it safe and sound. He opened up a money market account for me and then asked me this one simple question: “How would you like to make a quick $100 a week?”

“Yes, of course,” I replied. That is what I made working 40 hours a week as a waitress.

He presented all this blank paperwork for me to sign, which I did without hesitation. After I left, Randy filled in all the signed forms to make it look like I was a sophisticated investor and could afford to speculate with this money. Randy did this to qualify me to buy options which is one of the most speculative trading strategies out there. Now to make a long story short, within three months, ALL $50,000 was LOST.

Now if you just gasped or said to yourself, “Oh no,” what you have to always remember is that when one door closes, another one opens. Never forget that every “no” leads you that much closer to a “yes.” If losing $50,000 had not happened to me, I doubt I would have become who I am today.

Now I did not know what to do. I knew I could never pay the Buttercup customers back making $400 a month, so somewhere I got this thought that I could become a stockbroker.

After I decided to really try becoming a financial advisor, I went into Merrill Lynch and applied for a job. At that time, there really were not many women stockbrokers in the industry at all. Before I knew it, I was in the manager’s office interviewing with him only to hear him say to me, “Suze, listen, I personally think women should be barefoot and pregnant, but I am going to hire you but trust me in six months, I am going to fire you.” Thank you, affirmative action.

I of course asked him how much he was going to pay me to make me pregnant. When he said $1,500 a month, it did not take me long to figure out that in six months I could make $9,000, which would take me two years to make as a waitress.

Here is what you all need to understand: I could not have been more unqualified for the job if I tried. No formal education. No family training. No business background. Nothing! Yet I simply had the courage to try. Courage, my friends, is one of the eight qualities of wealth and one that you need to keep working for you 100% of the time.

This theme of not being “qualified” but being courageous continued on throughout my entire life.

From having a speech impediment to being one of the top motivational speakers in the world today. To getting my first BIG book deal at the age of 45 when I was that kid who could not even read that well. To being told by a big TV agent that I did not have what it takes to be a TV personality when just a few years later I won two Emmy awards.

Many of you think the keys you need for success depend on how you grew up financially, who you know, where you went to school, or having the luxury to accept an unpaid or low-paying internship. WRONG, WRONG, WRONG.

What makes you stand out in this world far above anyone else is when others look at you and can see that spark in your eye, hear the passion in your words, feel the love that you have for others, and witness that fearless energy to conquer any task in front of you.

I am sure if my friends who knew me as we were growing up thought back on it, they would tell you that they are amazed that I became who I have become. And really no one is more amazed than I am. But you do not know what the future holds for you. You do not know what door is going to open for you. Your job — and actually your only job — is to walk through every one of those doors with the intention to always give it your all, to always give it your best, and to always exceed everyone’s expectations.

What is so funny about my life is that I never dreamt about who I have become. I did not even know how to dream that big and most likely in your own life, neither do you. But that cannot stop you. Only you can stop your own success. There are no obstacles in this world that are big enough to keep you from being that which you are meant to be. If you are finding there are obstacles in your path, I suggest that you get out of your own way.

The Finality of Death: Reflections from a Mom and Wife 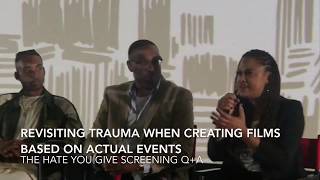 Staying The Course: Why Focus & Consistency are the Keys to Winning

The Finality of Death: Reflections from a Mom and Wife

Staying The Course: Why Focus & Consistency are the Keys to Winning